When I was being trained on the Jungle Cruise I learned about a trick the trainers liked to play on their trainees. I was taking a “dead” (empty) trip with my trainer to practice my spiel. He was sitting in the back of the boat and I was, of course, up front. We entered the temple so I sat down and watched the scenery. As I got to the end of the temple I stood up and turned around to get ready to spiel again. When I did I saw me trainer had disappeared from the boat. I assumed he jumped out at the exit point located inside the temple (Midway through, look in the water and you will see large stone blocks laying there. This is the walkway to the doorway just beyond). I shrugged and decided to keep spieling. I turned around to face the elephant pool and my trainer was hanging from the front of the roof of the boat. He scared me to death. Of course, I played this trick with one of my trainees a few years later.

One morning, I was the first boat with guests to leave the dock. As I rounded the corner and entered the “African Veldt” there was horticulture CM using the weed whacker on the Veldt. A new species of wildlife, I guess. At the end of the Veldt is the “Native Uprising” where the explorer and natives are on the pole trying to avoid the Rhino’s horn. One day, as I finished my spiel about that, a passenger next to me said, “With friends like that, who needs enemas?” (Implying about how close the Rhino’s horn is to the bottom man’s behind). And one trip I had a lady in the back of the boat start giggling at that point in the ride. And then for the rest of the trip she just kept laughing hysterically at everything. All I can say was that it made my day. I wish more crews were like that. And the interesting thing was how the guests would rather watch the ducks in the river mating, then watch the millions of dollars worth of animation we had. It is true, at the native ambush one of the natives yells “I Love Disco.” Listen closely right after the first ambush sounds are made.

And an acquaintance of mine was fired from Disney one day while working the Jungle Cruise. He was at the entrance/exit plaza in front of the attraction. Now, at the Magic Kingdom, the Swiss Family Tree House overlooks the J.C. plaza. “J.” was out front doing something when a guest walked up and asked: “Could you tell me what the Swiss Family Tree House is?” I guess J. had had it with guests that day and said: “Look lady,” pointing at it, “It’s a god-damn tree!” Needless to say, he no longer works at Disney.

The college program guys (I worked in MK when only males worked the J.C.) would throw the lead into the river on their last day. But if you went totally underwater you had to go to first aid to get your ears washed out. There was a possibility of getting something nasty from that water.

One of the most stupid acts I ever saw at J.C. was from some new hire. I was at the unload position and he was to bring a boat from the storage area and get ready to bring it onto the ride. Well, he forgot to switch the track switch from one side to the side he was bringing his boat from. He drove the boat through the track switch and the front guide wheel got caught in it. No big problem, just yell for someone on the dock to change the switch. But he didn’t, instead he threw the boat in reverse, climbed out, and turned the switch himself believing he could jump into the boat as it backed-up. Unfortunately, the transmission on the boat screwed up and the boat was actually still in full-throttle forward. As the track switch changed positions the boat shot forward right into the boat I had just finished unloading. Luckily all the guests had exited so no injuries. But the doofus had lunged for the boat and got dragged through the water as held onto the back railing. It was like watching some bad silent-era slap stick film.

There was another guy, “J.” who somehow “lost” his gun from his boat. Now when a gun is lost or stolen it’s a BIG deal. They are real .38 Specials but the barrels are altered so a real bullet can’t be fired. It would explode in your face if you tried (that didn’t stop skippers from sticking ammo in the end of it and shooting the spent shells as they fired them). Well, J. said he went to get his gun at the Hippo Pool and it was gone. He had a boatload of Brazilians at the time but can’t say if they were smart enough to take it. I think one of them did as a souvenir. Well, the ride was closed for the rest of the day as divers searched the river for it. It was never found. I always enjoyed the bunnies and Patagonian Cavy’s that would appear on the veldt or at the Pygmy Canoe beach. On the beach I’d tell them they were killer rabbits and to watch out.

Supposedly there was the shape of Mickey’s head on the backside of Inspiration Falls (at the beginning where the butterflies are) but not on the guests side. You had to walk through the jungle to the backside to see it. I never did get a chance.

At the Elephant Squeeze Play, where it seems like you are going to get soaked by the elephant, I had a lady lunge at the controls to stop the boat because she through we were going to run into the elephant ahead shooting water in front of us. I also had a lady lunge at the wheel when she thought we were leaving the dock. She thought the boat was going to go straight ahead and run into the shore. She was sure embarrassed as the crew and I stared at her when the boat turned itself (yes, it is on a track).

During heavy rain periods (they happen often in Florida) we are told to drive slow around corners because it is possible to drive the boat out of the guide-trough because of high water level. It never happened while I was there, though I always hoped it would.

It was really cool, too, when maintenance put the dye into the water system. There were a few colors they used: several greens and a Tidy-Bowl blue color. The entry point is Schweitzer Falls. Do you know how attractive the falls are when it looks like the blue water from somebody’s toilet is pouring over it? Then you could actually watch the stuff slowly spread through the ride as you went around. They used some industrial strength dye. Everyone told me never to get the dye directly on your clothes because it would never come out. I believed them.

One trick skippers in dead boats like to do is pretend they are dead as they go under the falls and a loaded boat comes the other way headed for the Hippo Pool. Usually we just slumped over the wheel and lay motionless. But I heard one skipper like to take the lanyard from the gun, attach it to the roof beam and put the noose-like end around his neck. He then kneeled on the stool and made it look like he hung himself. Pretty cool.

An old friend of mine worked the J.C. one year. He was spieling when a huge black snake dropped from a tree and landed on the front of the boat. Totally disposing of his manly demeanor, he ran screaming to the back of the boat like a girl. There were always snakes around. It’s Florida and snakes are a fact of life. You especially saw them around the Temple where the rodents like to live. I saw some really huge rat snakes around that area.

One day at unload this skipper was helping guests out of the boat by taking by the arm as he was supposed to do. Some snotty little kid yanked his arm away and said he could get out himself. He promptly tripped and fell on his face. There is a God.

This lead who most CM’s didn’t like decided to jump on the front of a boat and reload the gun for a skipper. Don’t know exactly why he didn’t let the skipper do this himself. Well, as he was doing this, the boat behind them, full of passengers, rammed into the boat with the lead. The lead promptly lost his balance and fell into the river. I also remember the same guy trying to jump a rope in the Haunted Mansion queue for the heck of it and catching his foot so he ate the pavement. If you just wait long enough, the ones you don’t like get it. Chalk another one up for our side.

And one final memory for now of the J.C.: The worst day I worked there (besides when I was sick or allergies prevented me from spieling) was the time it literally rained for 3 days solid. That was the most miserable time there because there is no way to stay completely dry. 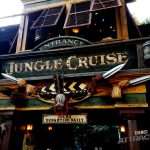