According to the 2018 TEA/AECOM Theme Index and Museum Index released by the Themed Entertainment Association (TEA) and AECOM, theme park attendance has topped half a billion for the first time in history. Additionally, 2018 attendance at the top 10 theme park groups grew 5.4% over 2017.

This milestone for the themed entertainment industry–capturing the equivalent visits of 7% of the world’s population–can be partially attributed to unprecedented capital investments, I.P. focused offerings, and emerging technologies.

The Theme Index and Museum Index is an annual report which tracks the performance and growth of the world’s most-visited theme parks, water parks and museums. The index collects data to present a globally collective view of the state of the industry.

“The TEA/AECOM Theme Index and Museum Index is an important aspect of how our global membership association serves the global industry with information and resources,” said TEA International Board President Michael Mercadante of Main Street Design. “TEA values its continuing partnership with AECOM.”

Key Figures from the 2018 Theme Index

At the time of this article’s publishing, Disneyland is welcoming its first guests to the opening day of Star Wars: Galaxy’s Edge, the highly-anticipated, new themed land based on Lucasfilm’s Star Wars franchise. It’s easy to imagine that this addition will drive even greater park attendance in 2019 for Disneyland and Disney Hollywood Studios (where a version of Galaxy’s Edge will open in Fall 2019). Intellectual properties like Star Wars, Avatar, and Harry Potter have contributed greatly to the growth of park groups like Disney and Universal.

Brian Sands, Vice President / Director – Economics, Americas, AECOM, said, “The biggest growth is IP-driven. The big players are in a position to command the big IP – and have full awareness of the power of these franchises and what they can do in a storytelling environment, with innovative experiences and rides, made immersive with state-of-the-art technology.”

Disney parks dominate the list with eight parks in top ten spots representing over 121 million visits in 2018. Of the top 25, there are four Universal parks and two Chimelong parks. 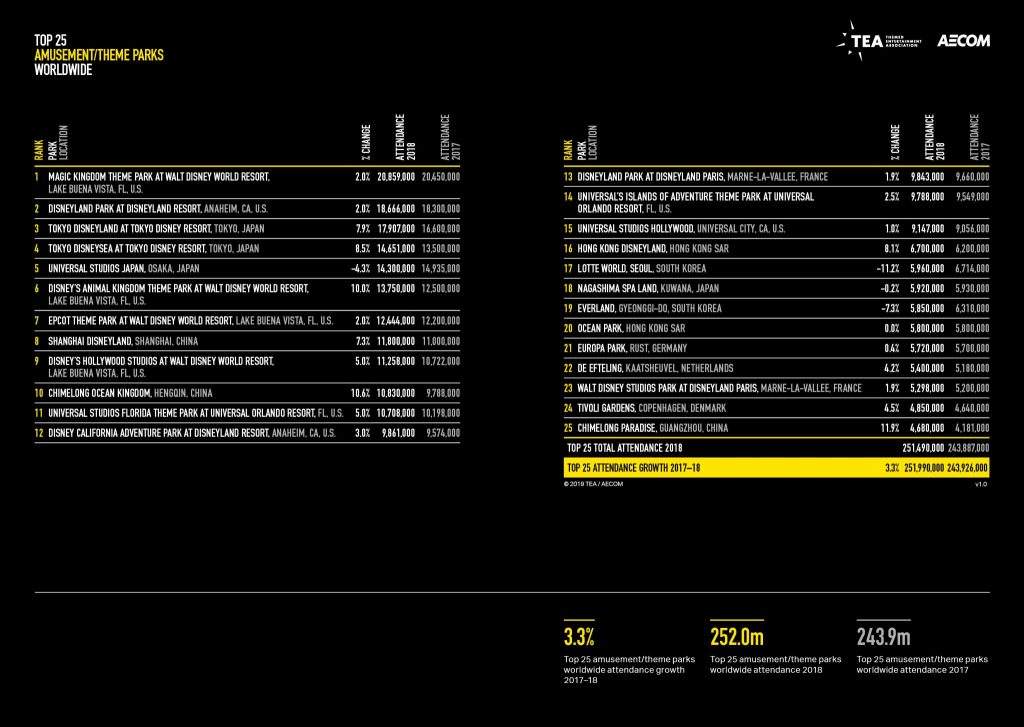 Topping the list of museum attendance is the Louvre in Paris. Recent closure due to overcrowding at the famed museum along with frustrating guest experiences points out that this destinations wasn’t built to handle the millions or more visitors per year. And still they continue to attend. As global, cultural destinations, many of the museums in the top 20 continue to see growth year over year and may see similar challenges.

Further breakdowns of the data (including sections on parks in the Americas, EMEA, and Asia-Pacific) shed more light on competition and growth in regions worldwide. A special section of the 2018 report includes a breakdown of the top 20 observation experiences, featuring locations lie the Eiffel Tower, London Eye, and the Empire State Building.

“The TEA/AECOM Theme Index and Museum Index stands as an invaluable and meticulously researched business and educational resource. Members of the media, researchers, analysts, students and many others turn to it again and again throughout the year. Published now for well over a decade, it shares a wealth of historical and current information,” said Judith Rubin, editor of the report and director of publications for TEA.

The complete 2018 TEA/AECOM Theme Index and Museum Index is available to download free of charge from the TEA website and AECOM website. It is published first in English, followed shortly by a Chinese-language version.

A long look behind the scenes at the Imagination Corporation
February 20, 2021

Duplicating Disneyland is harder than you think: The CV Wood parks
October 4, 2020